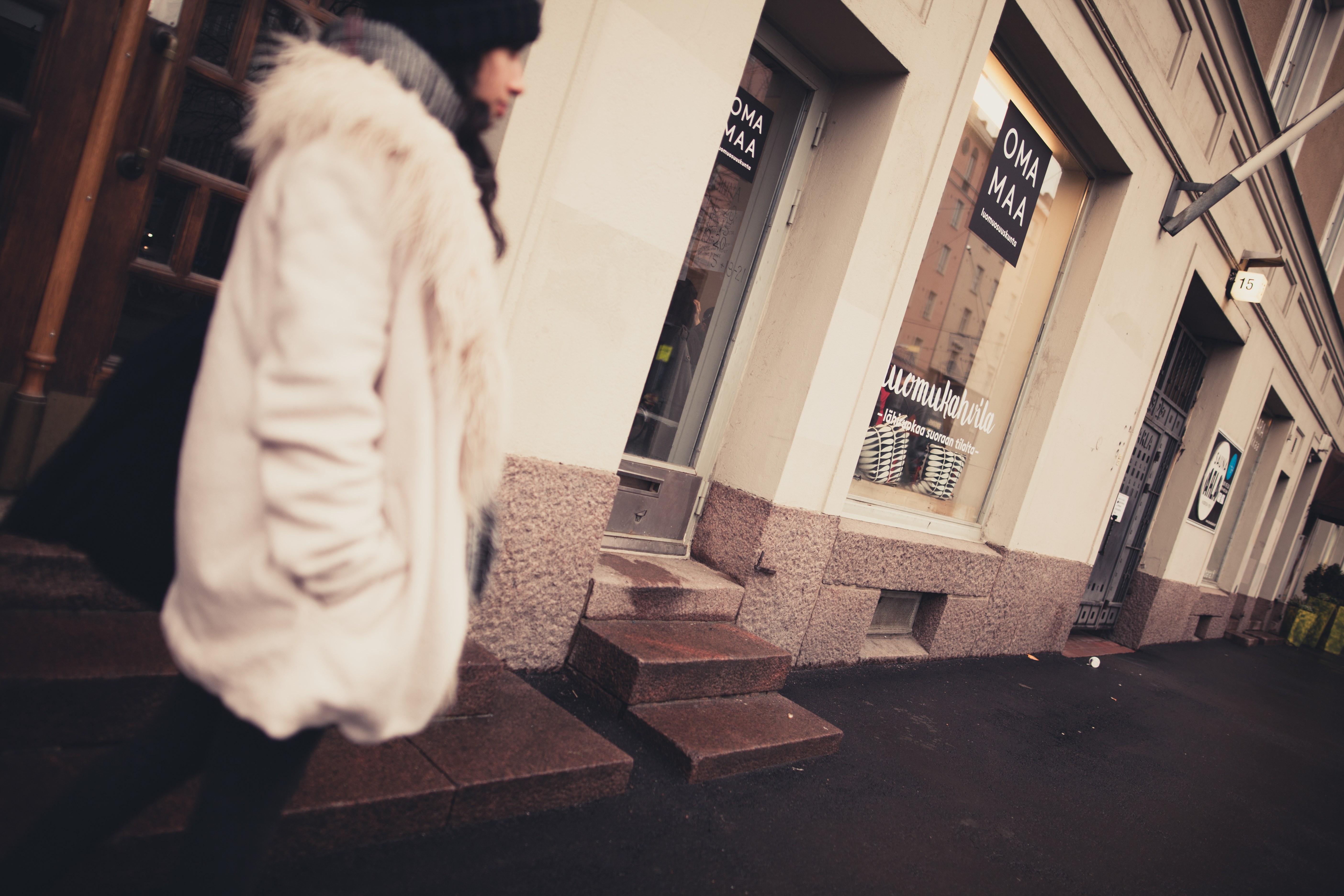 The arbitrariness of borders has been criticized for curtailing the basic human right to freedom of movement. Yet national identity, arising from the territorial demarcation of countries can be a strong component of self-identity as highlighted by an interview with two refugees on their experiences in Finland. Central to the success of any integration programme should be a recognition of similarities and differences – ways to relate to asylum seekers as fellow human beings without trivializing the importance of the unique cultures they are from.

It was with some trepidation that I entered Osuuskunta Oma Maa, a café in Kallio that hosts a coffee evening for asylum seekers every Wednesday. After all, it was only months ago that refugees arriving into Lahti on a bus were met with violent attacks and vandalism and arson attempts continue to be directed at reception centres. How could I expect a warm greeting for encroaching on the weekly social event of people who have been made to feel unwelcome for surrendering to the most powerful human instinct that has enabled us to endure as a species through all sorts of devastation – the need for survival – merely to ask some intrusive questions?

My fears however proved unfounded. I was hailed with smiles all round that did not falter even after I revealed my purpose for being there and showed them a copy of the magazine I hoped to feature them in. Two hours later, I left with more stories than I can use, the phone numbers of my new friends and the desire to return to see them next Wednesday, this time, with no ulterior motive. I find it somewhat ironic that the first question at “Coffee without borders”, as the coffee evening is called, is “where are you from?” It highlights to me how even in an environment that is open to all regardless of nationality, ultimately national identity is how people orient themselves towards each other. 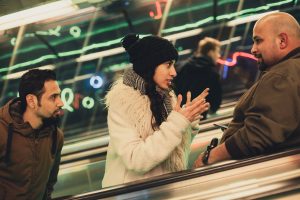 Ali, aged 27, comes from Afghanistan and April marks his ninth month of living in Finland. For the most part, it has been a good, if not easy nine months. Once an engineering student, now a refugee, in addition to the onerous task of learning Finnish, he also had to wait three months after applying for asylum status to get a work permit and even longer before he actually managed to find a job. He is now employed in the construction industry which has been criticised by different experts including Tarja Filatov, Social Democrat MP and a former Minister of Labour for using foreign workers to cut costs by offering lower wages and benefits. However, despite the less than optimal conditions in which he is employed, he considers himself lucky to have a job as most of his compatriots are still searching.

In his spare time, he goes to the gym, swims and plays football with friends he made at the coffee evening – regular pursuits that he might have engaged in back home in Afghanistan as well but that don’t make him feel at home in the country he now calls home. Accustomed to striking up conversations and making jokes with random strangers seated on public transport with him in his motherland, he is deterred from drawing unnecessary attention to himself by the hostility he has grown accustomed to from passers-by in Finland.

Even his friendly and gregarious nature has not been enough to facilitate many friendships. He mentioned that it took him six months to be considered adequately trustworthy to merit an invitation to a Finnish friend’s home and the invitation itself posed a dilemma about whether or not he should follow the Afghani custom of taking his host a gift. He went armed with candy and flowers and described at length how happy he felt when the candy was instantly devoured and the flowers arranged in a vase because those simple gestures signified for him his first moment of true acceptance. This was enough to momentarily lift his cloud of despondency, which was clinically diagnosed as depression by advisors at the mental health services he has been obliged to visit in Helsinki.

Depression is not something Ali is acquainted with, coming from a happy go lucky culture that has no place for individualistic Western ideas on mental health so the diagnosis did nothing to alleviate his homesickness, lack of belonging, shifting identity and loneliness. The coffee evenings and the camaraderie he has found there amongst equally displaced people offers him the kind of solace that therapy cannot. Looking outside the window from the safe confines of the café, at people who can call Finland home in a way that he may never be able to, he commented on how the atmosphere in the café is the closest he has felt to home since arriving in the country. Notwithstanding, as his friend sitting next to him gently reminded him, “You have to remember, what is outside this is normal, what we have in here is not. “ But for now, what Ali has found in the café and his life in Helsinki has given him a sense of peace, if not happiness. 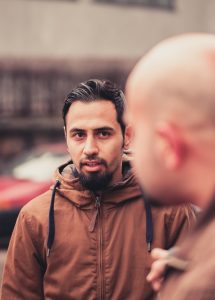 It is precisely for this tranquillity that Hussein, a thirty-year-old chemical engineer from Iraq, risked his already threatened life by crossing the sea without knowing how to swim. He has now been in Finland for six months and has experienced bellicose glares since he arrived. “The incident of sexual harassment that took place on New Year’s Eve has given all refugees a bad reputation,” he said, observing that women cross the road and hurry home a little faster when he encounters them on a dark, lonely road. He also narrated an incident when he had a man come up to him and start yelling at him for fishing, accusing him of doing so without a license. The man was not a police officer or anyone in authority, yet Hussein instinctively felt the need to pull out the license he had obtained to silence the man’s uncalled for comments.

Such comments also manifest in the form of discourse on lazy immigrants who do not want to work and are content with living on benefits and the ignorance of such rhetoric frustrates him. What the masses do not realize is that legally, he was prevented by law from looking for a job till he received his work permit. Even after obtaining the permit, he found it hard to gain employment, taking part in all the training he is offered by the reception centre to increase his chances of doing so. He is reluctant to approach the construction industry where Ali found work as he clings to the hope that he might find employment in the chemical engineering field that he is skilled at. His positive outlook has enabled him to remain confident that the current situation will change, that refugees will be accepted and jobs will open up and cites an example of how Turkish refugees came to be accepted, even valued because of their food culture that they brought to Finland.

These sentiments are not shared by his fellow countrymen as statistics issued by officials suggest that out of the 4 100 asylum seekers who have cancelled their applications for refugee status in Finland, almost 80 percent are Iraqis. When asked about how he has remained so optimistic, his response is that after sleeping with a pistol under his pillow and not knowing when his slumber would be interrupted by people who wanted to harm him, the racism, animosity and hardships he experiences now are a small price for feeling safe, for having a good night of sleep and being able to take a walk at night and not feel afraid.

A stroll sounded like a good idea at this point after the heavy conversation so we left the sanctuary of the café to stretch our legs. It was a chilly, overcast day, with a sky which like a petulant child, threatened to burst into loud wails at any moment. People scurried home, anxious not to be a part of the tantrum, leaving the usually buzzing streets of Kallio deserted. An ideal evening for a walk, in my opinion as I really appreciate the serenity of Finland partly because I come from India, a country with a population of over 1.2 billion where opportunities for personal space are few and far between. Hussein however hates the solitariness. An avid photography enthusiast, he elaborated on how he would sometimes venture out in Baghdad to take pictures of the empty streets. Such photos never gave him any joy though because they only served as symbols for why the streets were deserted, the people who had to flee from the terror and those who never made it alive. Thus, what was peaceful and calm to me because of where I come from was desolated and lifeless for him because of where he came from.

Suddenly, the optimism he displayed in the café was replaced by a bleakness that matched the weather. I inquired about his religious beliefs. A Muslim by birth, his experiences have made him questio 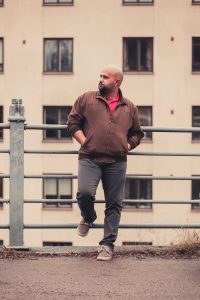 n his faith and he has been feeling increasingly lost. He finds himself turning to the bible to gain a more holistic perspective that can complement his knowledge of the Quran. We passed a flower shop and he paused, peering wistfully inside. I looked at him questioningly and he asked me if I like plants. “Sure,” I replied, thinking with some shame of the two drooping plants I own that have somehow withstood a year under my care. A forlorn look crept into his eyes as he described his spacious, well laid out gardens back in Iraq that he spent numerous hours in, attending to the plants and birds he kept in it. “People think I came here because I wanted work, an easy life. I had a highly paying job, a big house, all the comforts one could need. I came because I wanted to feel safe and if Iraq could offer me that, I would be back on the first plane.”

Not that he is not grateful to Finland, as is Ali. At least temporarily, they have gained a new home in the country and some respite from a war they did not start that threatened to finish them. Hussein talked about how he is sure he can win the people in Finland over with his food and his humour. It is true, Finnish people do love a good Middle Eastern meal. However the spices are often dulled down to make it more adaptable to local palate. In adopting similar assimilative strategies with people, there is the risk of dampening the asylum seekers determination and zest for life. And after losing their family, their home and their country, more effort should be made in helping them protect and find the one thing they have left: their sense of self-identity.
The names of the people interviewed have been changed to protect their identity. 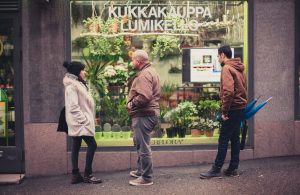